I attended a wine tasting dinner the other day featuring one of the biggest Burgundy Domaines: Bouchard Père & Fils. Here’s the list of wines that we tried that night, though regrettably I couldn’t finish tasting all of them =(

As you can see, there were vertical tastings for several of the wines, I couldn’t possibly finish tasting them all right? =p

So I went, for my own education and for the delicious wine. Whatever opinion I may put down on this blog, it is of my very very beginner level wine learner’s not-so-humble opinion. It is not a replacement for professional tasting notes whatsoever. 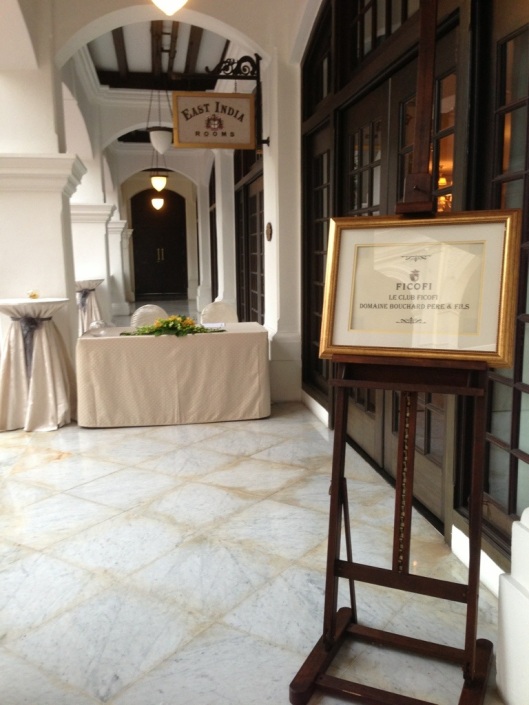 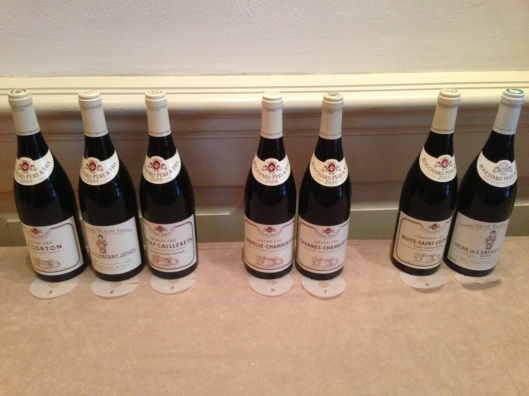 At the reception before the dinner, they lined up bottles of some of the reds and whites as listed above. The rest would be savoured with dinner.

I started off with a Mersault Genevrieres 2011. It came to be one of my favourites of the evening. 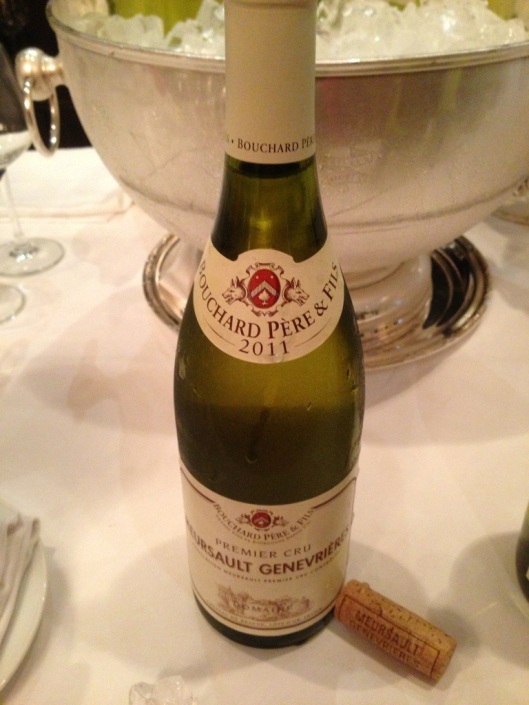 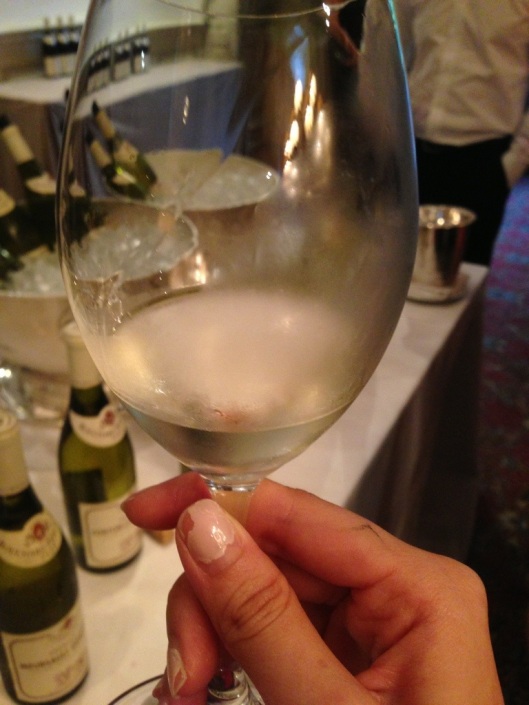 The wine colour is not so golden, more of a pale lemon colour and has a nice soft, floral nose. Smooth on the tongue and complex, it tastes light, fruity and fresh and has a nice long finish. Actually the ones I actually tried to time had a pretty long finish, all 6 seconds and above. I forgot which ones but the selection that night was really good so it doesn’t matter to me.

Please forgive my morbid looking nails, I’m quite ashamed of them =( fixing them soon!

And so, after pouring away (to my regret) the excess wine, I moved on to the second wine in line; the Corton Charlemagne 2009 and was slightly taken aback by the taste, coming from the floral Meursault. 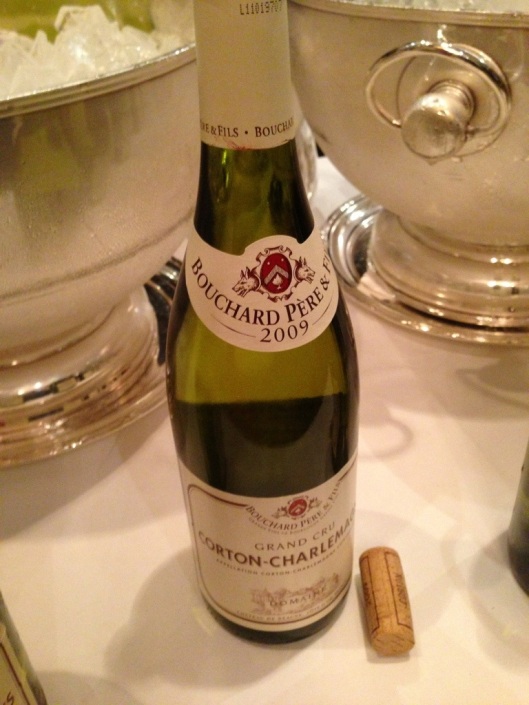 I tasted the 2009 and 2010 bottles. Both wines are complex, and befuddled me at first. I can’t truly do justice to these, though I could have understood them better if I stayed a while longer to slowly figure out the different tastes. The 2009 had minerals, slight oak nose as well as in taste, not as much fruit as the Merseault but more of… stone? Lol if that made any sense at all. 2010 had a stronger smoky nose and it was apparent while drinking as well. Slightly heavier, minerals and not overly acidic but I don’t think its ready to drink yet. 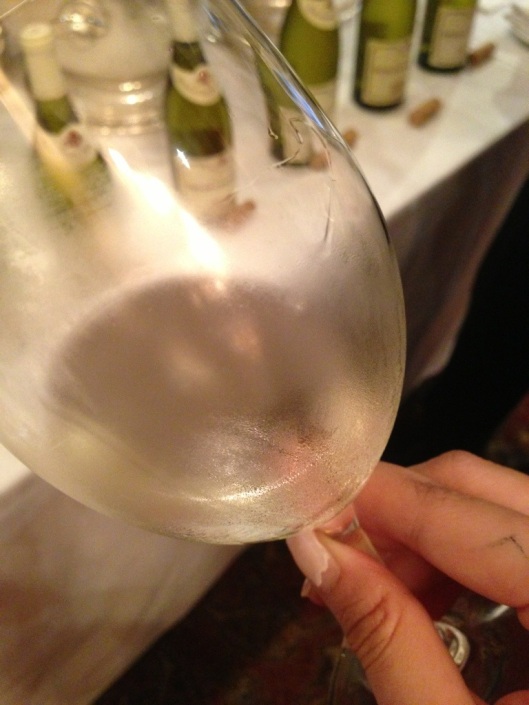 Nice light straw colour to it. 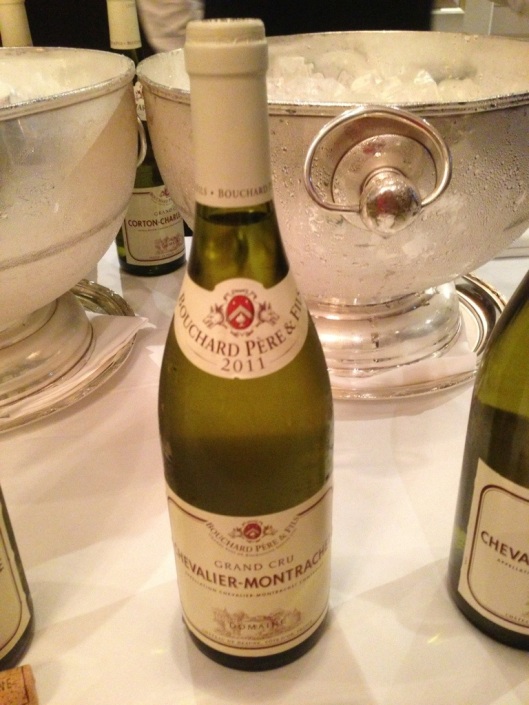 Next up, the heavyweights: Chevalier Montrachet. Tried the 2011 bottle and I remember it was delicious. Had some floral and citrus notes to it and it was pleasing to drink. However I preferred the next bottle, the Chevalier Montrachet La Cabotte 2011. 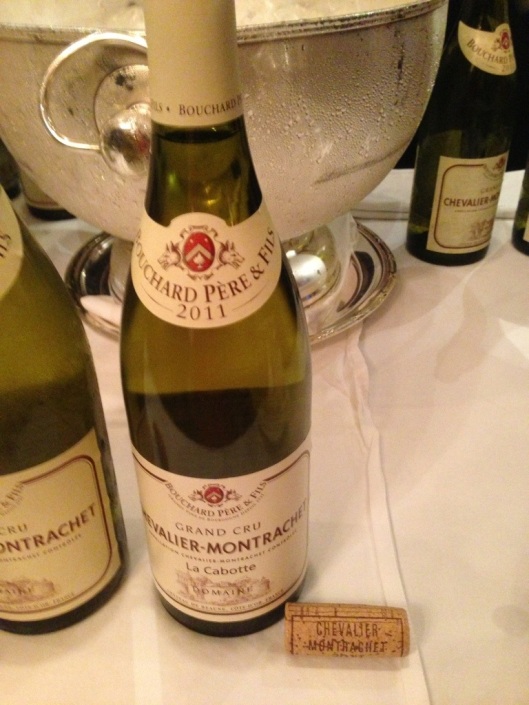 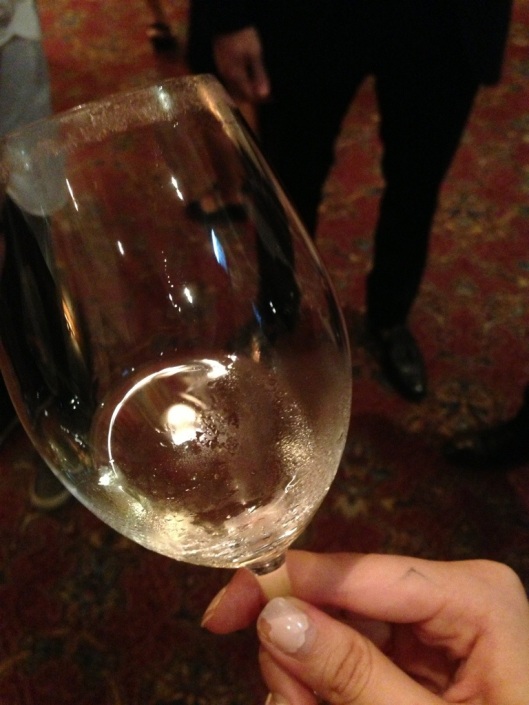 It was richer, grander and had hints of butter and citrus flavours that last long after you’ve swallowed the lot. Good fruity perfume on the nose and a gorgeous full bodied mouthful. Very good indeed.

By this time I was already flushed and hot, even before dinner! And I couldn’t try the reds that were lined up there =( which was such a waste.

Judging by the number of glasses lined up at the dining table for each person, I think it was a good idea to have stopped myself from the red wines at the tasting table! There were 10 glasses for each of us! Not including the water glass. 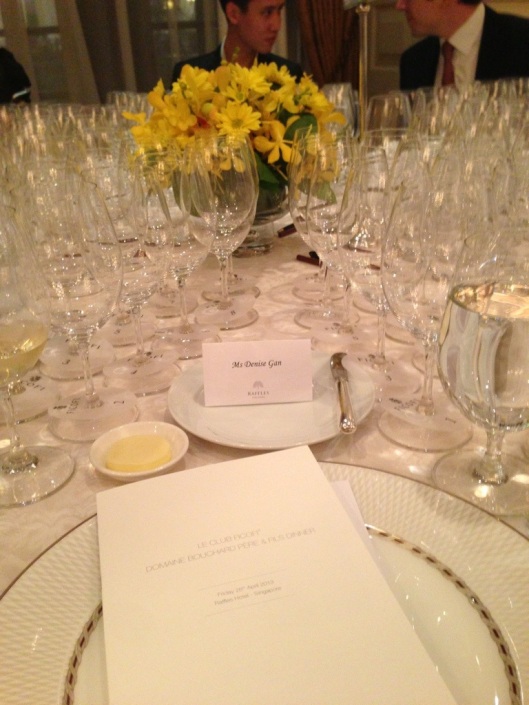 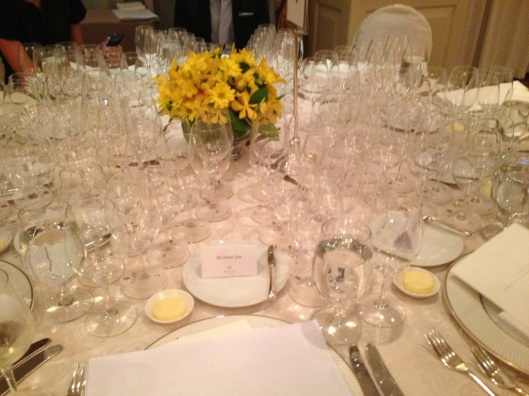 Started off with a smoked salmon appetizer. 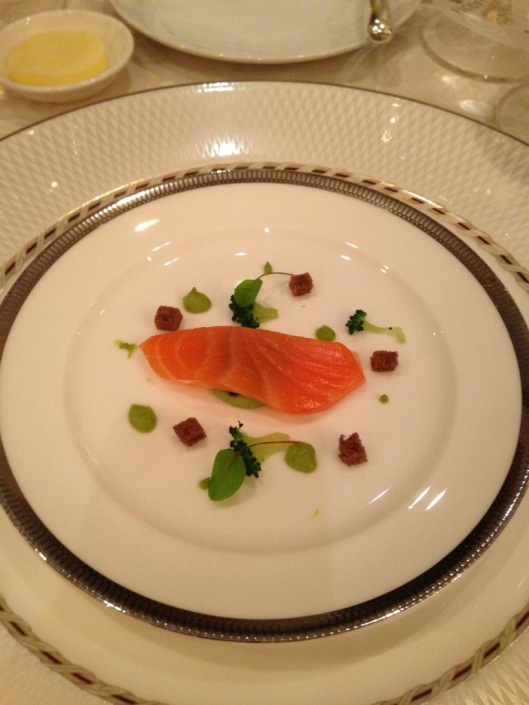 Here, they had already poured the Meursault Les Perrieres 2006, which tasted a little young but pretty balanced, clean and sharp. Also some fruit in the palate, but surprisingly after I went the whole round of whites and reds and back to this glass, it tasted a little like barley. Strange. Not bad though. 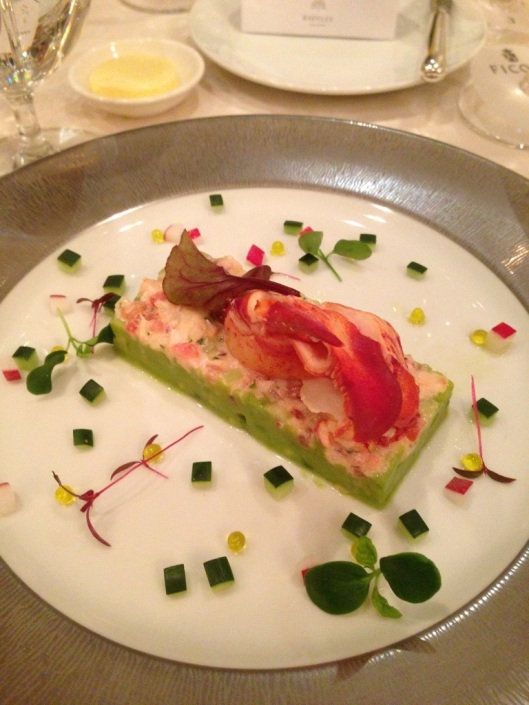 I don’t have a picture of it but I also tried the Corton Charlemagne 2003, which was a tad buttery and a hint of citrus/lemon. Again, similar to the other Cortons, there’s the inevitable toasted oak on nose and palate as well as minerals. Not too fond of these attributes in all the Cortons, although the toasted oak was much more subtle in this one than the other two. I’m just more of a fruity person XD

Another white wine that I tried with no picture: the Chevalier Montrachet 2008 had apparent toasty cedar oak notes and minerals to it. I mistook this for the Corton at first.

And then came the reds. We started with the Le Corton 2009 (Number 3). This seemed a little light, not as much concentration of fruit as I would have liked but it makes for a delicate wine. Slightly peppery, a little herbs and minerals with toasted oak aftertaste. The colour is also pretty transient. 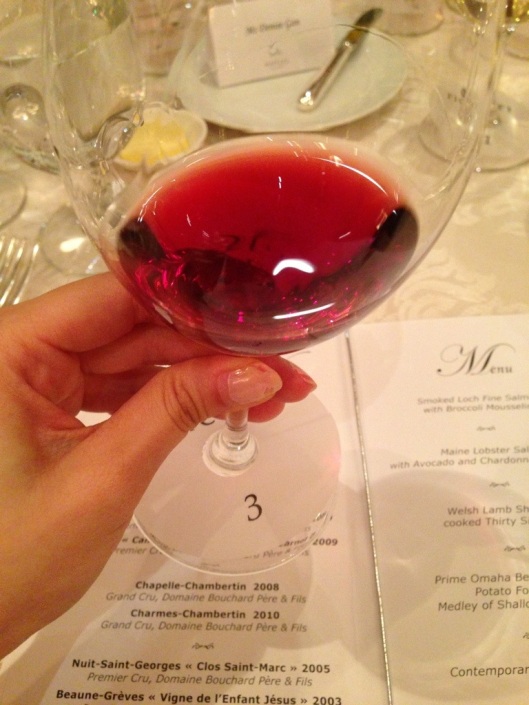 Next was the Beaune Greves 2009 (Number 4) This was one of my favourites as well despite the light red of it. Red fruit and sweet but still balanced by the acidity. Smooth and even a little bit minty. It made for an easy drink.

Number 5, the Volnay Caillerets Ancienne Cuvée Carnot 2009, Premier Cru, was a nice dark red color. Rich, sweet and silky with cherry notes and long finish. It was served alongside the Number 4 Corton with the Welsh lamb shoulder that was cooked for 36 hours, which was also surprisingly good and tender. I love red wines that go well with red meats. 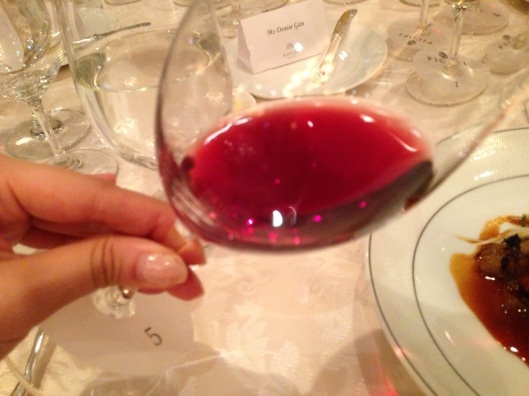 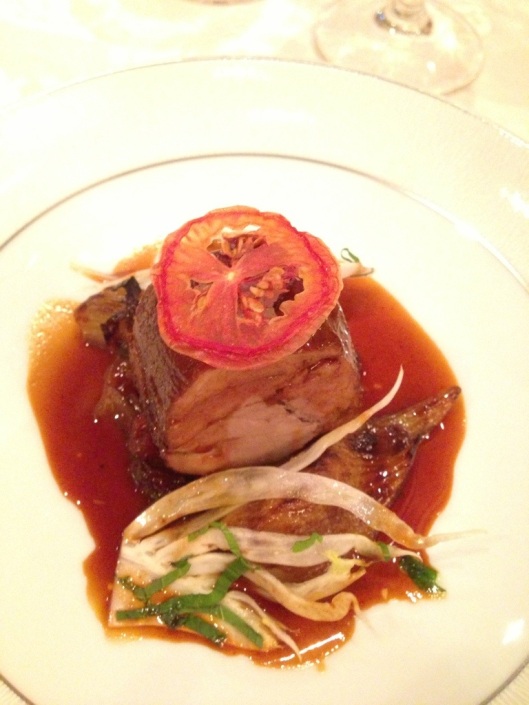 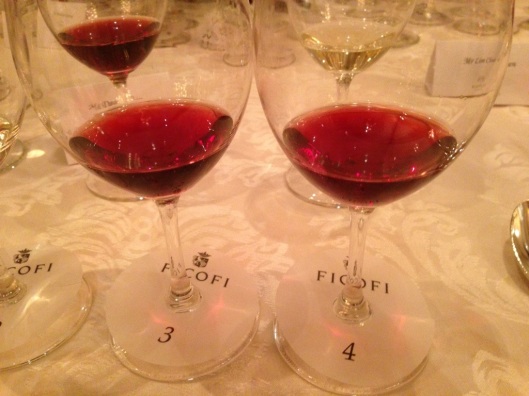 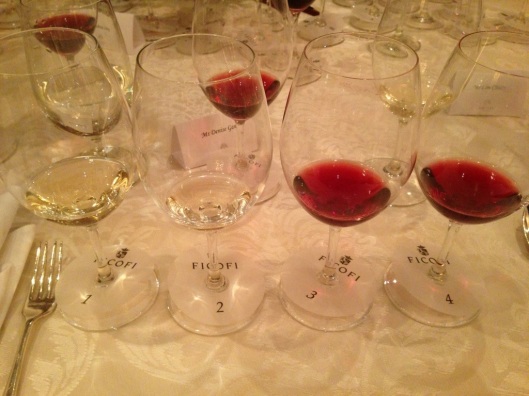 Here are the wines numbered 1-4. I can’t remember which is 1 and 2 as I’m confused between the Montrachet and the Corton. Have to check the names again. 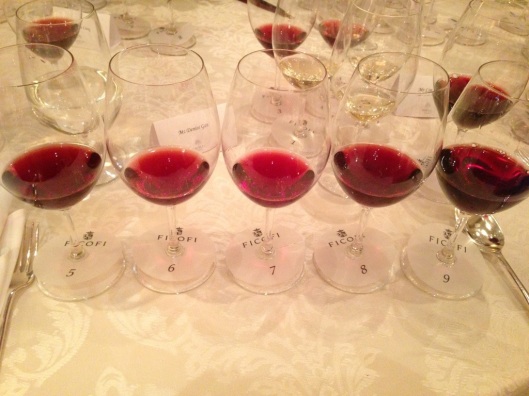 No. 6, Chapelle-Chambertin 2008; Of acid and tannins and slightly spicy with 6 seconds finish in the mouth. It seemed pretty structured with what I think was bouquet in the nose. I could be way off the mark 😉 That is the mark of an amateur.

No. 7, Charmes-Chambertin 2010; Had purity of fruit, as did the Chapelle Chambertin (according to the expert present, though I have absolutely no idea what that is supposed to taste like), and seemed delicate but yet complex with long finish as well. I guess most of these wines here are really good that most if not all have a nice long finish. Its probably good to wait a few years before it would make a good drink.

No. 8, Nuit Saint Georges Clos Saint Marc 2005, Acid and tannic with plum and spice. I’m not sure if I like the spiciness in a wine.

No. 9, Beaune Greves Vigne de l’Enfant Jesus 2003, had more depth, darker in color and was more full bodied than the 2009 vintage. Fruit and bouquet in the nose, a nice smooth drink that tasted of berries and again, the deep full bodied, meaty flavour to it that makes it perfect for pairing with meats. This can keep for many more years and is also one of my favourites of the night.

I love lining them up side by side so I can compare the differences in colour of the different wines. 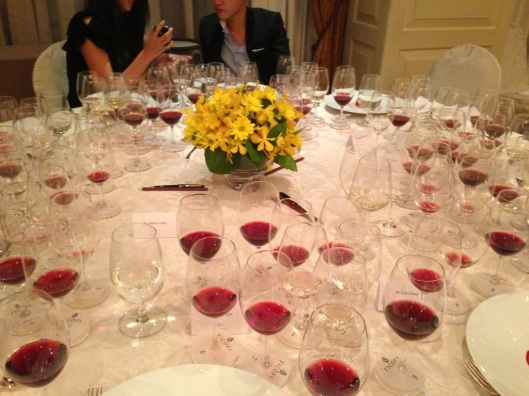 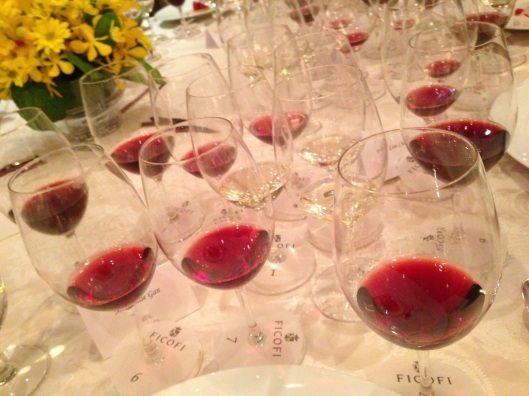 Ended off the night with a raspberry tart (skipped the beef course that came after the lamb). 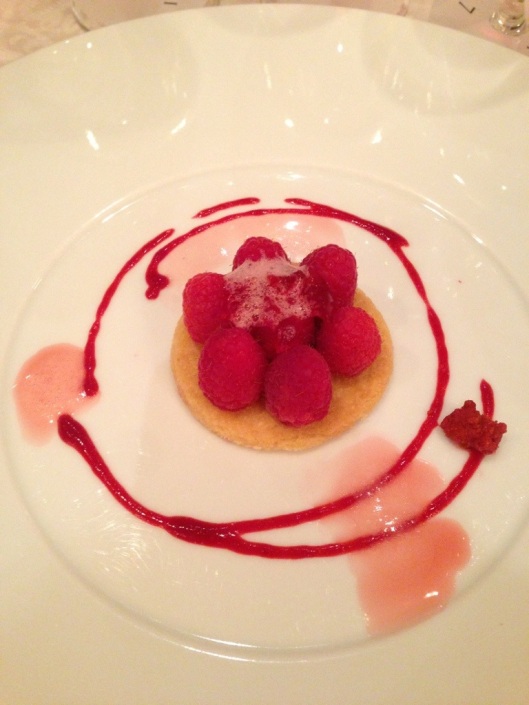 That night I went home with a raging headache, having tasted 17 different wines. So much more I have to learn =(.