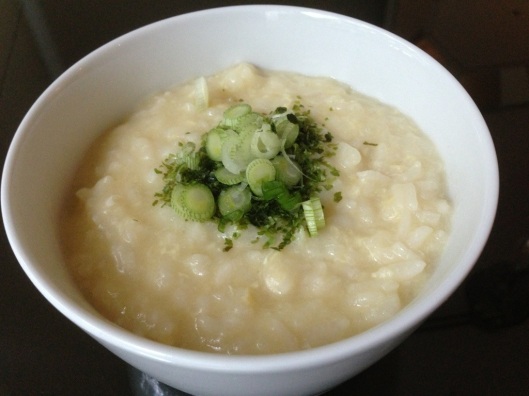 This is one of those quick fixes that can be done with just cooked rice and an egg. The other ingredients are cupboard ingredients (those that can be stored for a really long time), which is the beauty of this dish really.

If you’ve heard of the nabe (hot pots) that Japanese really love, you’d have also heard of them adding rice into the leftover stock once they’re done cooking the rest of the food. They then turn the rice into porridge, and thus, nothing is wasted.

And it is really delicious! I tried this “zosui” (the Japanese refer to thick rice porridge as zosui/okayu) in Hokkaido after a delicious kani-nabe ( I did NOT just swear at you lol!). Kani means crab, so what we had after the crab hotpot was some delicious stock. The waitress added more stock to it and then added precooked rice and let it simmer for a while before adding egg. It was the best porridge I’ve had!

I try to replicate it here the best I can without such expensive ingredients, crabs don’t come cheap in Singapore. I’ve come pretty close to it I think. 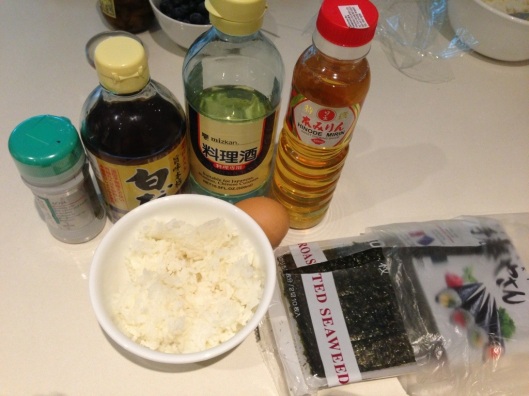 Ingredients (For 2 pax, or 1 hungry person)

Pour the dashi, water, mirin and wine into a pot and bring to a simmer.

Add the rice and cover the pot with a lid. Simmer on medium high heat until the rice softens. If you prefer really soft rice in the porridge, you could simmer it a little longer, just add some water so it doesnt dry up and stick to the bottom of the pot.

Once you’ve reached your desired consistency, turn off the heat and pour the egg into the centre of the porridge.

Work quickly and use the bottom of a ladle to stir the egg round and round until the egg is completely incorporated into the porridge.

You want the end result to look creamy. This is the end result of stirring the egg well. If you let the egg cook before you stir it in, it is going to look like an egg drop soup. Not like it tastes bad either, it just will not be as creamy as the picture below.

So the egg has to be quickly stirred in, in circles starting from the centre of the pot. If you were to stir it any way you wanted, the egg may end up streaky -___-

Then ladle it into a bowl and top with spring onions and seaweed.

So there it is, creamy Japanese porridge (obviously with zero dairy in it).

I love spring onions so I went overboard with it ;p 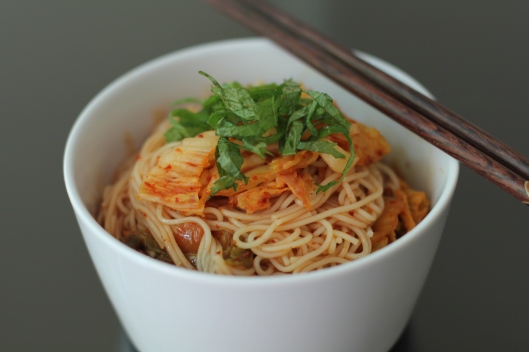 I’m a big fan of Korean dramas and variety shows (I’m sure I’ve mentioned this before). I blame it on those very shows that I’m getting fatter by the day. They make Korean food look so sooooo appetizing! These are one of the dishes that I saw on the telly sometime back. It sounded and looked good… cold kimchi noodles.

After a bit of research, I decided to try the recipe from Korean Bapsang (website below). Her stuff is what you’d call “daebak” (awesome). Her food photos and recipes seem pretty and easy to follow so I made the noodles a few months ago with the recipe. It was good! Totally would make this again. Cold, sour rounded by some sweetness, and a little spice. And kimchi always makes everything taste better.

Speaking about spice, I ordered this dish today at a Korean restaurant. All I can say is that I must have downed a whole jug of iced water after a few bites. I’m a person that would sprinkle chilli flakes liberally all over my food and use chilli padi soy sauce as a favourite condiment so I don’t think my spice tolerance is that low. But I really couldn’t enjoy the noodles, it being so spicy! So if you’re not a fan of spicy food, you can adjust the level of gochujang to suit your preferences (this recipe isn’t that spicy in any case).

Secondly, on my recent trip to Japan, I frequented a korean restaurant in Takashimaya, Tokyo (I really liked it!) and made a discovery. In all my posts on Korean food so far I’ve been referring to shiso/Japanese perilla leaves as the Korean perilla leaf. When I tried the real Korean perilla leaf I was taken aback. I absolutely had no idea that they were so different! As wikipedia clarifies:

“The flavor is distinct from Japanese perilla, and the leaf appearance is different, as well – larger, rounder, flatter, with a less serrated edge, and often a violet coloring on the reverse side.”

Well that explains why the leaf was so large. So now, I’m on a mission to find Korean perilla leaves in Singapore ;p

Bring a medium pot of water to a boil while preparing the kimchi sauce.

Thinly slice the kimchi and place it in a medium size bowl. Add the remaining sauce ingredients and mix well. 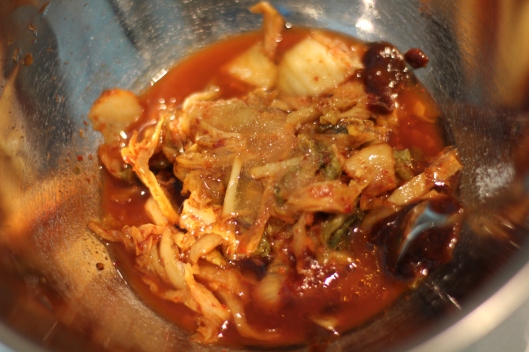 Add the noodles to the pot of boiling water. Cook the noodles according to the package instructions (3 – 4 minutes).

Prepare a bowl of iced water to dip the noodles into. The recipe in Korean Bapsang calls for cold water, however if it is not cold enough the noodles could get soggy quite easily. So just in case, just use iced water.

Drain the noodles quickly and shock in iced water to stop the cooking. Drain and rinse in cold water again. Repeat until the noodles become cold. Drain well. 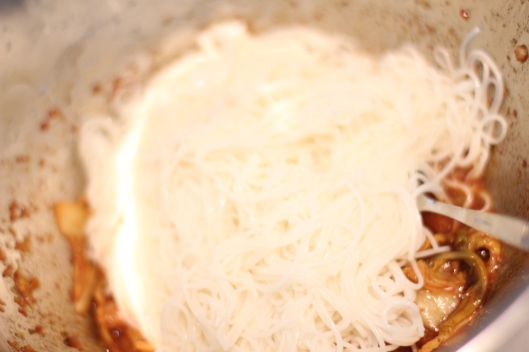 Here’s the fun part! Throw your cold noodles into the sauce mixture and toss so that the sauce coats the noodles evenly. Try not to over-handle the noodles with utensils or you could get mashed noodles. Not yummy. Use your wrist to toss the noodles in the bowl and use chopsticks to further mix the noodles.

Dish into a serving bowl and top with (Korean) perilla leaves. I thought Japanese ones worked just as well. 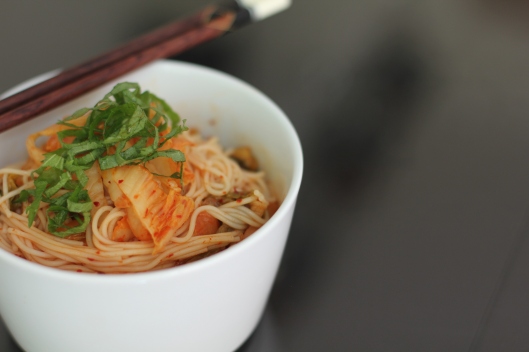 Perfect dish for a hot day! 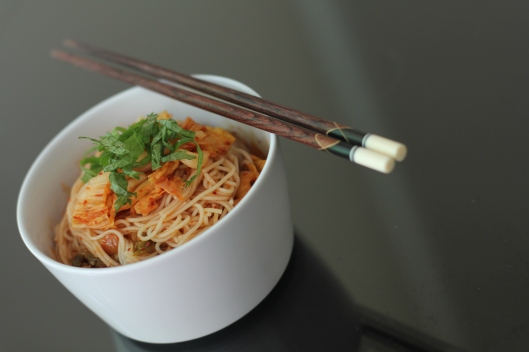