The above picture is from my 2nd attempt at making tamagoyaki. Its a pretty common food in Japanese and Korean cuisine. Perhaps the only difference is that the Koreans don’t make it with sugar, dashi or sake. Of course, the Japanese tamagoyaki has both sweet and savory versions but I prefer the sweet version. While it is helpful to have a rectangular pan for this recipe, it is not necessary. You can make tamagoyaki using a normal frying pan.

For my first attempt, I made tamagoyaki using only 3 eggs and using a low fire. Not only did I have to wait a longer time for the egg to cook, but the egg roll came out kinda small, flat and not as fluffy. It was worse when it got cold and shrank further in size T___T. I poured in only enough egg to cover the surface for the first round but this was a mistake in my opinion.

In my 2nd attempt, I used 5 eggs on medium-high heat in a smaller and deeper frying pan. I poured in half the eggs for the first round of cooking and that made the egg roll fluffier. The end result? Thick egg rolls!!! ❤

Other than that generally the cooking methodology is still similar, which is why I’m including my first attempt here as well.

You will need some kitchen paper for oiling the pan after each round of frying as well.

Combine the dashi/water, sugar, mirin, salt and sake into a bowl. Mix thoroughly.

Break the eggs into the bowl with the dashi mixture and beat to just combine but do not overly beat it as we want some egg white bits in the tamagoyaki. Run a chopstick a few times through the mixture to ensure that the eggs are broken up and can be poured easily.

Keep a bowl of oil with kitchen towel next to the pan. You will use this to continuously oil the pan after each round of cooking.

Oil the pan and heat it up on medium-high flame.

Pour in half the eggs. 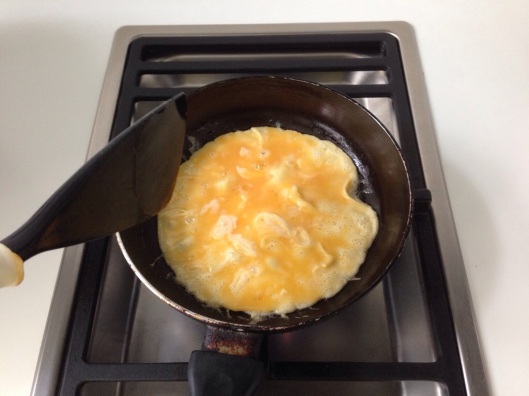 Scramble it a little. Fold over when the bottom is set enough to flip it over. Oil the exposed side of the pan, and then gently push the “omelette” to the side of the pan. Oil the rest of the pan before adding more egg. This time add just enough egg to cover the pan.

Above, I’ve already pushed the first layer of egg to the side and added the 2nd thinner layer. Lift the first “Omelette” so that the second layer of egg goes underneath to coat the entire pan. See those bubbles forming? Pop them! 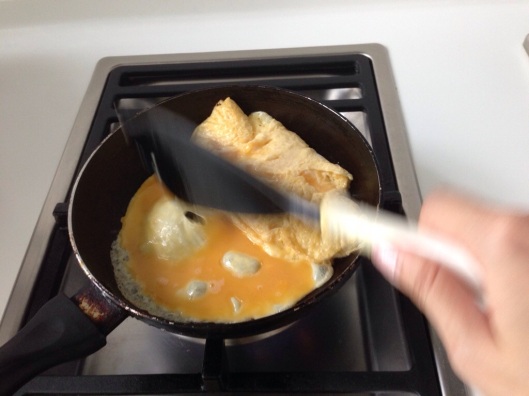 Hehehe! Once this layer is more or less set, flip the thicker part onto the thin layer. This would create the “roll” layer. Again, oil the exposed part of the pan, push the egg to that side and oil the rest of the pan. Then add another layer of egg. Continue the process until all the egg is used up. 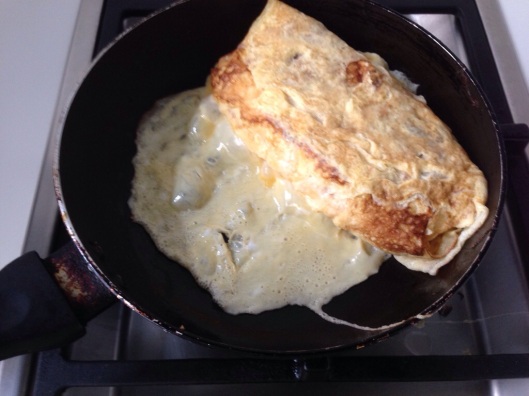 The last bit of egg… and you’re done! Brown the outsides if you like but don’t overdo it. If you want to shape the tamagoyaki into something more rectangular/oval you can make use of a sushi mat, but you have to shape it when it’s still hot.

Lastly, slice the tamagoyaki and serve 😉 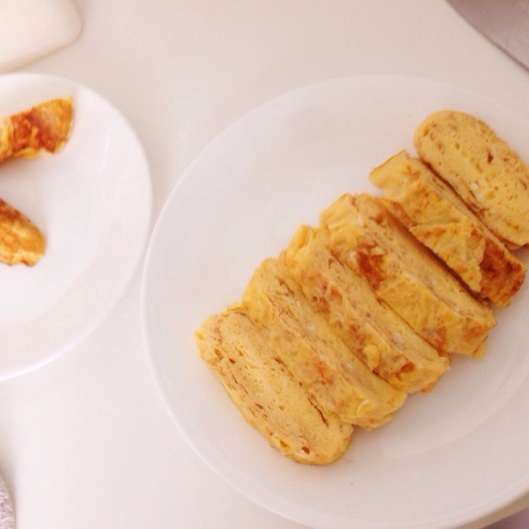 I’m also going to add pictures from my first attempt. You can see that the heat is lower and the pan is bigger. So I “rolled” the egg several times and pushed the egg to the middle instead of the very end. 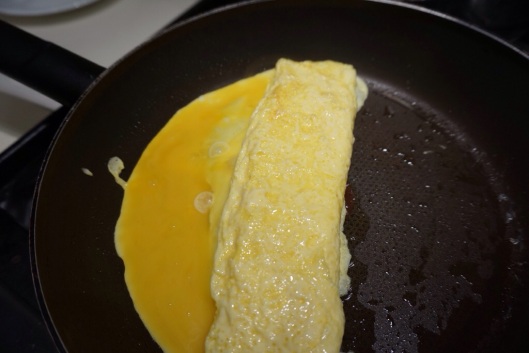 Waiting for the egg to cook before flipping the roll towards the left.

Above, after pushing the roll to the middle, I added another layer of egg.

Now to cut it! 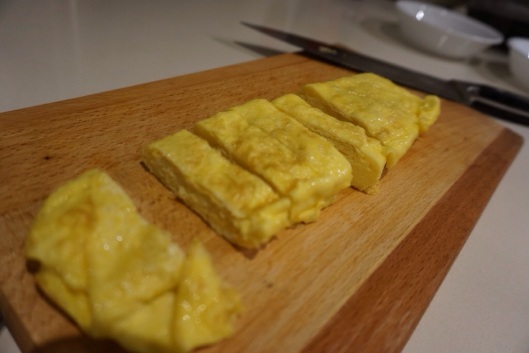 As you can see, the roll isn’t very thick. Also, it shrank after it cooled and wasn’t as fluffy. Which is why I prefer the first method of cooking on medium high heat and in a smaller pan. Cooking half the eggs and scrambling them in the first round saves time and also makes the eggs fluffy. So try it yourself and see which way works well for you.

I’ll leave you with some youtube links on making tamagoyaki :-