I’m currently on a Korean craze. I also am hopelessly addicted to Running Man, a korean variety show. But way too often do they show delicious, mouthwatering looking korean dishes and delicacies. Like sizzling Korean bbq, grilled oysters, kimchi, ramyeon, sea urchin, spicy ddukbokki and the list is endless. One of these demonish dishes I just saw on another episode is something called ‘ganjang gejang’, which is raw crab marinated in soy sauce and fermented. It sounds disgusting but it looks so good T______T I googled countless recipes on it but then decided against making it. One because I have no clue how to get the freshest of crabs in Singapore, and secondly, I don’t think I have the courage to successfully pickle/ferment the crab LOL.

So I settled for this dish instead. Technically its supposed to be a spicy sashimi rice bowl, but, like chirashi-don (sashimi on vinegared rice) versus just sashimi and rice in separate bowls, I really prefer to keep them separate. I like my rice hot, and this would wreak havoc onto sashimi if placed onto the rice directly like that. So yeah, I put it in a separate bowl. The sashimi salad is spicy, sour and sweet and has a nice crunch from all the vegetables in there. It could have been spicier, perhaps next time I’ll add some sliced chilli padi into the sauce for for a “BURN TONGUE BURNNNNN” experience =D 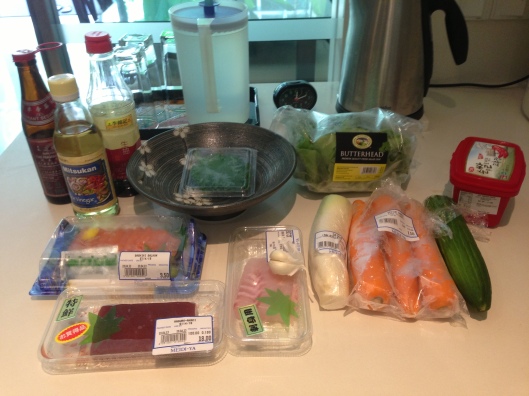 Ingredients (2 pax)
I adapted the recipe from here http://www.food.com/recipe/spicy-sashimi-bowl-hwe-deop-bap-221946 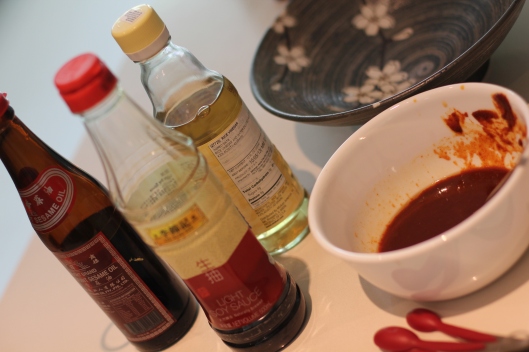 5. Arrange the sashimi on top of the vegetables, top with minced garlic, and cho-gochujang sauce and garnish with shiso leaves. 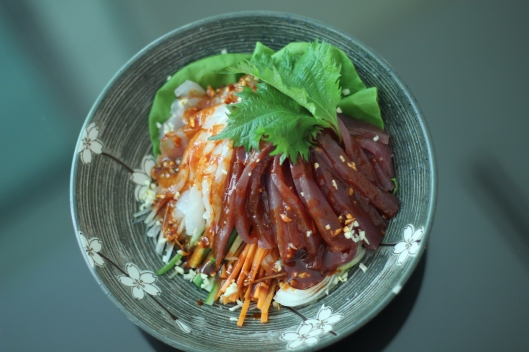 Tastes a bit like the Chinese Yu Sheng which I really really like. And it is pretty healthy isn’t it 😉

Take a few photos of your slicing efforts 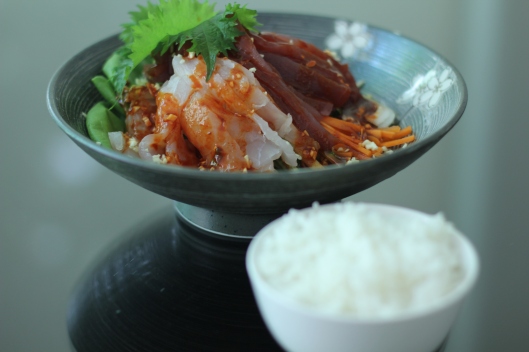 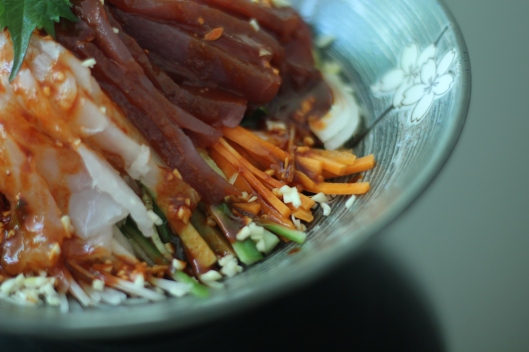 Then you mix the salad. Toss it and mix it and get the sauce into every nook and cranny.

Get your hot rice ready, alongside some shiso leaves for wrapping. If you don’t like the taste of shiso leaves, you can replace them with lettuce or other vegetables.

And so, you take a leaf, plonk some of that hot rice on top, followed by the sashimi salad. Stuff it into your mouth. Charming.